Jernej Bizjak received a residency and a co-production at Bora Bora Residency Center via open call 2020. He and a team of dancers, actors, conductors, designers and sign language experts, will be working on a new project titled “For Ludwig”, which will be performed at Bora Bora in the autumn of 2021. Jernej also received two additional residencies through Bora Bora Residency Centre with the residency exchange program Dance & Dramaturgy EU.
Marika Peura, Kaisa Nieminen & Suvi Kemppainen (FI)

Marika Peura, Kaisa Nieminen & Suvi Kemppainen received a residency at Bora Bora Residency Centre through the Nordic Residency Exchange Program. They will be working on material for the new performance “and then they left”.

Roni Chadash received a residency at Bora Bora Residency Center via open call 2019. Roni and her team of 5 dancers have, due to covid-19, been at home in Israel for the residency, working on a new project. 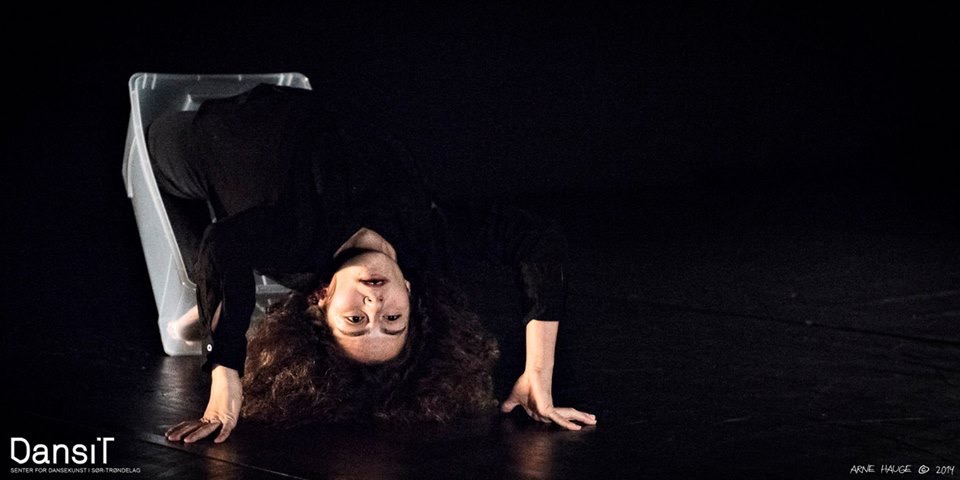 Roza Moshtaghi is a freelance choreographer and  dancer in collaboration with artists from the fields of dance, sound, technology and visual art. She is curious about how she, buildings, streets, nature, bodies and objects in general react or adapt to structures.

Rósa Omarsdóttir is an icelandic choreographer and dancer, based in Brussels. She studied theatre and contemporary dance at the Icelandic Academy of the Arts in Reykjavík and has since created pieces that have toured in Europe. In her residency with Musik- og Teaterhøjskolen i Toftlund, she works with her team on creating a new contemporary dance piece on ecosystems with inspiration drawn from the phenomenon of ‘dark ecology’, using scenographic elements as important participants on the stage.

Igor & Moreno is a Southern European choreographer-duo, based in London, with a interest in people and what makes us such special animals. They started creating stage works collaboratively in 2007, co-founding ‘BLOOM! dance collective’ in 2009 and ‘Igor and Moreno’ in 2012.

Colette Sadler is a British choreographer and dancer based in Berlin. She is trained in Classical Ballet followed by completing a BA (Hons) at the Laban centre, London.
In her upcoming performance More Future, More Past Colette will be working in depth with the integration of video and light with a focus on interactions between humans and technology.
The residency centre gives her the opportunity to immerse herself in the technical work by providing facilities that she normally does not have access to in this part of the creation process.

Colette has received a residency at Bora Bora Residency Center via open call 2018.

Adriano Wilfert Jensen is a choreographer, with a BA in choreography from the School for New Dance Development, Amsterdam. He is in the final stage of his piece “Feelings”, researching inhuman contact improvisation and activating various forms of touch. “Feelings” premiered at Bora Bora in the end of January 2019.

Adriano has received a residency at Bora Bora Residency Center via open call 2018.

László has finished is residency at Bora Bora, currently working on an upcoming project.

Steinunn Ketilsdóttir is an Icelandic dance artist based in Reykjavík. She graduated with a BA in Dance from Hunter College NY in 2002 and in 2016 she received an MA in Performance Studies from NYU Tisch School of Arts. Steinunn has worked internationally throughout her career, alone and in collaboration with others, creating a number of works that have been awarded and shown at venues and festivals in Europe and New York. She is an active member in the Icelandic dance scene as a maker, performer and teacher, and involved in the development of Reykjavík Dance Festival and the Reykjavík Dance Atelier.

Steinunn is currently developing and presenting her ongoing solo project, OVERSTATEMENT/OVERSTEINUNN: Expressions of Expectations and working on her choreographic research project EXPRESSIONS: the power and politics of expectations in dance. During the residency with Bora Bora, Steinunn and her team will be diving further into this work.

Noora Hannula is a Finnish dancer and prize-winning choreographer, who mostly operates in and around Denmark and Finland as the artistic director of the new Nordic dance company. ​She has a BA in modern dance theater from Amsterdam School of the Arts and has choreographed her own work since 2011, winning prizes for some of her works. Noora has danced for Mute Comp. Physical Theatre, Quan Buin Ngoc (Les Ballet C de la B) and Uppercut dance theater among others.

Since 2016 Hannula has focused on themes reflecting on the digital age, researching in topic such as online self, digital partners and constructed intimacy. With Snap Me, 20231 LIKES (2016), the first work of her SOME SERIES she drowned her self into social medias role regarding our identity, and right now continues the reflection on the digital in our lives with the first work of her DIGITAL LOVE TRILOGY: Noora Hannula vs. Soma The Augmented-Reality Girl – THE ULTIMATE BATTLE (2018).

Noora and her team worked on different aspects of a piece for the trilogy, during their stay with Bora Bora. DIGITAL LOVE TRILOGY embraces three topics: Digital partners, Constructed intimacy and AI enhancements. The project has received grants from the Kone Foundation and Nordic Culture Fund.

Katrín Gunnarsdóttir, born in Iceland (IS), 1986, went on to study dance at Iceland Academy of the Arts and choreography at ArtEZ Institute of the Arts, graduating in 2008. She received a DanceWEB scholarship in 2007 at the Impulstanz festival in Vienna. Katrín received the ‘Gríman’ – The Icelandic Performing Arts Award as “dancer of the year” in 2017. Her work has been presented at numerous venues and festivals in Iceland, including Tjarnarbíó Theatre, Reykjavík Dance Festival, Lókal, Everybody´s Spectacular, The National Theatre of Iceland, ACT Alone Festival and A! Performance Festival. She has toured internationally with her work since 2014, showing in festivals and programs in Europe.

Katrín and her team spent their time with Bora Bora in early 2018, working on “Crescendo” which will premiere 22nd of March 2018 at Tjarnarbíó Theatre, Reykjavík. “Crescendo” is funded by Iceland Ministry of Education and Culture and supported by wp Zimmer, Kunstencentrum BUDA (BE), Dansearena Nord (NO), Dance Atelier Reykjavík (IS) and Bora Bora (DK).

Cristina Planas Leitão was born in Porto (PT), 1983. She graduated with a BA in Dance Performance from ARTEZ – Hogeschool voor de Kunsten in Arnhem (NL) in 2006.
In 2011/12 Cristina co-created & performed “The Very Delicious Piece” alongside Jasmina Krizaj, which was produced within the framework of the Modul Dance (EDN) network with more than 30 international performances. An enlarged version of this piece, featuring 8 women, was a finalist at Danse Élargie in 2016. In 2014 she premiered her critically acclaimed solo “Bear Me”, which was presented at the GUIdance Festival 2015. Bora Bora aims to associate Cristina Planas Leitão with the Danish dance community for inspiration and exchange with both spectators and industry.

Esther Wrobel is a Danish/Israeli dancer and choreographer. She was born in Israel (IL) in 1981 and was educated at the Mathe Asher School for performing arts. Since 2002 she has worked professionally with Modern dance, butoh, air dance, contact impro, acrobatics and physical theater. In addition, she has worked as a freelancer in Israel, Denmark, Holland, France, Austria and the United States.
In 2011, she received a prize from the Danish National Arts Foundation for the dance show “The Room” together with Camilla Barratt-Due and Samuel Moore.
Her last production, the family performance “Fly Trap”, has been touring in Denmark and abroad for the past two years, including China.
Esther is also a permanent teacher at Denmark’s newest education for new circus: ‘AMoC – The Academy of Modern Circus’.

In January 2017, Bora Bora had the pleasure of having Esther Wrobel in residency in connection to the “Inspiration Room” platform.

Her performance Taking Space #4, a site-specific airdance at Nordkraft (DK), will be performed at the end of 2017 as part of the celebration of the National Art Foundation’s 50th anniversary.

Marble Crowd is an ensemble whose members are based in Reykjavík (IS), Brussels (BE) and Gothenburg (SE). The core group consists of artists Sigurður Arent, Kristinn Guðmundsson, Katrín Gunnarsdóttir, Védís Kjartansdóttir and Saga Sigurðardóttir. The ensemble has worked together for more than a decade and in several different contexts. Since 2012, they have worked on two major stage productions: the choreographed concert “Scape of Grace” (2013) and the techno-tragedy “PREDATOR” (2014). Both productions premiered at Reykjavik Dance Festival (IS), where “Scape of Grace” was nominated for an Icelandic Performing Arts Award.

In January 2017, Bora Bora had the pleasure of having Marble Crowd in residency with their performance “Moving Mountains in Three Essays,” which then premiered in March 2017 in Kampnagel, Hamburg. The production is a collaboration between Marble Crowd and K3 Tanzplan Hamburg and was presented as part of the TOGETHERAPART festival, funded by the German Federal Cultural Foundation and in co-production with Bora Bora, Reykjavik Dance Festival, The Nordic House in the Faroe Islands and the Decameron Festival, Funded by the Nordic Culture Fund.

Milla Koistinen has graduated from the Theatre Academy of Helsinki (FI) with an MA in dance and from HfS Ernst Busch/HZT Berlin with an MA in choreography.

She has worked, among others, with Kristian Smeds, Hiroaki Umeda, Peter Verhelst (NTGent/Johan Simons), Cie Heddy Maalem, Christine Gaigg, Hans van den Broeck and Les Ballets du Grand Maghreb. Since 2008 she has been creating her own work, which have been played, among other locations, in HAU Hebbel am Ufer, Tanzhaus NRW, Mad House Helsinki, Ballhaus Ost and in Uferstudios Berlin.

In the spring of 2017 Milla Koistinen was working with the support of Arts Promotion Centre Finland’s six-month artist grant. Her latest creation “On a Clear Day” was developed during her residency at Bora Bora in April 2017.

Sonya Lindfors (1985) is a Helsinki-based choreographer and artistic director. She has been working as a freelancer in the Finnish dance field since 2001. Lindfors has a vast working experience ranging from musicals, street dance and commercials to music videos. Nowadays her focus in her own artistic work is in the fields of contemporary dance and theater. Lindfors is also the founder and producing artistic director of UrbanApa – arts platform (www.urbanapa.fi ) for new artistic practices.

In June 2017, Bora Bora had the pleasure of having Sonya Lindfors in residency.
During the 2017 – 2018 season Lindfors will be the house choreographer of Zodiak – center for new dance.

He is committed to developing an individual language for movement and has worked both in collaboration with others and independently. In fall 2016, he performed in WOMAN by HIMHERANDIT Productions, a performance that premiered at Bora Bora. In addition, Daniel Mariblanca was in residence at Bora Bora in July 2017 in connection to his solo project “71BODIES 1DANCE”.

Marie Topp (DK)
Performer and choreographer living in Denmark and Sweden
In residency at Bora Bora January/February 2016, as part of the residency Inspiration Room

Colette Sadler (UK)
Choreographer and dancer
In residency at Bora Bora November 2016, as part of the production Learning From The Future

Recoil (DK)
Performing group under the direction of choreographer Tina Tarpgaard, living in Copenhagen (DK)
In residency at Bora Bora June 2015, as part of the production ON/ VOLT

Bára Sigfúsdóttir (IS)
Dancer, performer and choreographer living in Brussels (BE)
In residency at Bora Bora December 2014

Fitter, tighter, more beautiful, now, now… NOW!! "V.O.M.P." holds a mirror to our beauty-worshipping society's botox-stiffened face in this silicone-pumped dance performance about our hunt for the perfect body. A grotesque greeting to the Baroque era's powdered wigs and delicate soap bubbles.